Today is a short review because I have like no time to write! And, I have a review tomorrow to write too.

This month one of the things we reviewed were the Tiki Cat Carnivore Variety Pack Canned Cat Food, this food comes in 9 flavors out of 12 cans for $17.49 It is a 2.8 oz can each, mostly of water, but no complaints with me; cats need at least 65% of their diet being water based from their food. I believe these are about 82% water on the package I read, (dunno though as I threw away the case after taking these pictures and I no longer have any cans left). Flavors are: Beef & Liver, Sea Bass, Beef Liver & Chicken, Beef Liver & Lamb, Bonito Tuna, Chicken & Liver, Chicken & Duck, Chicken & Turkey, Tilapia. 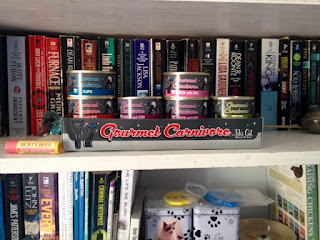 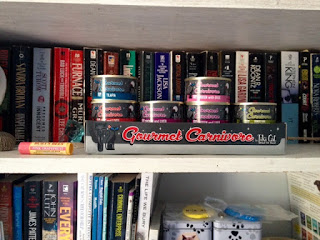 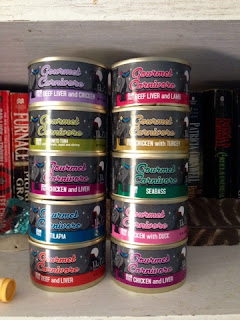 
Ragdoll Mommy~
Posted by Life with Ragdolls at 6:30 AM 1 comment: 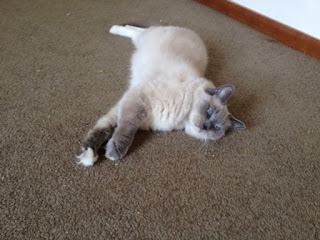 
Ragdoll Mommy~
Posted by Life with Ragdolls at 9:55 PM No comments: 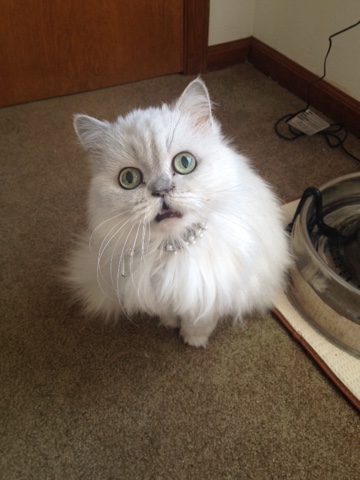 Happy Birthday, sweet Angel pie. You're 13 years old today! My sweet, and blind baby girl, you see with your heart that you're loved dearly and always cherished by me. <3
Ragdoll Mommy~
Posted by Life with Ragdolls at 12:31 AM 4 comments:

How Being a Dog Owner Taught Me to Hate Dogs


Let me rephrase that to say 'How Being a Dog Owner Taught Me to Hate My Dog'. Okay, its true I don't hate all dogs, I'll make an exception for English Mastiffs and a few breeds, but I will never own another dog again. Here's why.


Almost 2 months ago, I made a terrible decision and got a dog. I don't know what I was thinking, I thought I wanted something more playful and interactive than my cats. All my life nearly everyone told me how great dogs are, "man's best friend", "they're like children", "best family pets" and so on. I brushed it off over the years in favor of cats, fish, ferrets, etc. Anything but a DOG I told myself.


It was a black mouth cur mix, medium size and weighted 50lbs. I adopted her sight-unseen from a person in Alabama. We drove 3 hours to a small rural place out in the country in Alabama to meet the dog's soon to be former owners, picked up the dog and drove her back to our place. I named her Sevetla for my love of  foreign languages and names, Sevetla is a German  name meaning  'light'.

Like I said, I really don't know what I was thinking. I thought I wanted a dog, second most popular pet in America (second only to cats and now I know why....). I had visions of walking this dog in the park, running\jogging with her, playing fetch, throwing a ball into a lake while she would jump off the dock into the frigid water again and again. I wanted her to protect me and be by my side while I walk in the dark out in public where you never know who may attack you, I wanted a dog to lie by the foot of my bed and if someone where to knock on the door she would bark and alert me, I wanted a dog that I could train and enjoy everyday and refer people to her as 'my best friend'. Such was not to be.
Sevetla was a very anxious dog. The first night I brought her home she started chewing and gnawing on everything in the house (keep in mind that Sevetla was 6 months old at the time and already had all of her adult teeth in, so this was not teething), She chewed through several toys I bought her, I never thought anything of it until I realized Sevetla was not going to stop her chewing, after doing some research and calling my vet, I learned that Sevetla was experiencing extreme amounts of anxiety. I didn't blame her, really. The owners she only ever knew just gave her away to a stranger.

Unfortunately, Sevetla was proving to be a bad match for my life. I was too busy to walk her anymore than once or twice a day in the yard before I brought her back in. I had work, school, my cats, and house chores to focus on instead. Sevetla would not respond to training by any method, I managed to teach her sit and come. That's it. I tried treats of various kinds, including human foods, nothing worked. Sevetla was for the most part, highly disobedient and rude, she would jump on anyone (including me), she would get excited when I'd yell at her to get off of strangers and proceed to bite my forearm, she would pull on her leash and broke two collars doing this, she loved to chase bikes, cats, small dogs, and kids. Bringing her out in public was a nightmare and possible lawsuits awaiting to happen.
Not to mention that she had severe car anxiety. She would pant excessively and whine, if I left the car she would crap on our genuine leather seats. If that isn't bad enough, she was extremely picky about all things food. I tried kibble, canned, raw, she would eat this one cheap grocery kibble puppy food. I can't recall the brand. She would not eat in front of anyone not even me. She would growl and attack people\other animals if they got too close to her food. She attacked poor Angel several times when she would randomly walk in her space (Angel is blind).


I am a neat freak. If something is out of it's space, something gets sticky or has pet hair on it, etc I go a little insane. Sevetla would shed everywhere. I had to brush her several times a day just to stay on top of all of the dog hair tumble weeds flying across the floor, air, and furniture. Sevetla was a short-haired dog too so this kinda struck me as surprising. I had even went as far as feeding her a grain free dog food, I believe that grain free foods are not the best for dogs because they are omnivores, just like humans, but there is a pretty huge hype of society claiming grain free improves the coat, body, and all around health for dogs. I think they're confusing this with cats and ferrets who are true carnivores. Needless to say, grain free could not fix or at least reduce Sevetla's  severe shedding problems. Oh yeah, and don't forget the dirt she tracked in. Oh the dirt. Dirt. And yes, I am fully aware that anything that goes outside or comes in contact with the great outdoors is going to bring in something.That's just the way it is. And don't get me wrong, I love being outside and taking walks, hikes, swimming, running, etc. But oh boy how I loathed having to vacuum and sweep so many times to retain my sense of hygiene. One of the down sides of being a neat freak is, is that you're constantly worried about dirt, germs, sticky stuff, pet hair, etc. This caused me great bouts of anxiety and a fat load of stress. I also have a bad case of misophonia (literal hatred of sound), it pretty much runs in my bloodline. Nails on chalkboards, forks scrapping plates, chewing, slurping, breathing, licking, baby crying, etc all cause extreme enragement for me. Sevetla had an obsession for licking herself (she did not have fleas), and this caused me huge enragements. It got so bad that I winded up screaming at her to shut up, stop, quit it, etc. When my rage is triggered by a hated sound, it makes me want to kill whatever is making that sound, or if that is not possible, then myself. That dog had an array of sounds to annoy the ever living fuck out of me....


Sevetla was a shy and very self conscience dog, she also had little to no self confidence. Not to mention she was submissive and way too needy and greedy.I on the other hand, am a very confident person, I am dominate, ambitious, self driven, independent, honest, blunt,  strong opinionated, and a side of arrogance smeared in there. I am one of the few people that knows, deep down in side, what she or he really wants in their lives. When the personal chemistry between me and that dog was not showing, I knew it was time to do something about it. I am the type of person that generally loves a good challenge (not to mention I am a pretty competitive person with the things I am passionate about), but one of the few things I am not good with are; needy, submissive, un-self confident, self centered people. Sevetla was a dog but totally fit my criteria for something I cannot and will not work with it. It all would of been worth it if I actually wanted her in my life, but the truth is, I didn't.
After nearly 2 months of dog ownership, I have learned that they are not for me. Sevetla now resides a few states away from me with her new owner.

My near 2 months of abortive dog ownership taught me several things:

Feel free to express your own opinions and ask any questions you may have, but please, don't be a jerk. I tried really hard with Sevetla (really I did), and I do ask that everyone keeps their offensive comments to one's self. This blog is not 'world wide news', well it is if you think about it, but it is merely a past time and journal of me and my animals' lives.

Posted by Life with Ragdolls at 12:00 AM No comments: 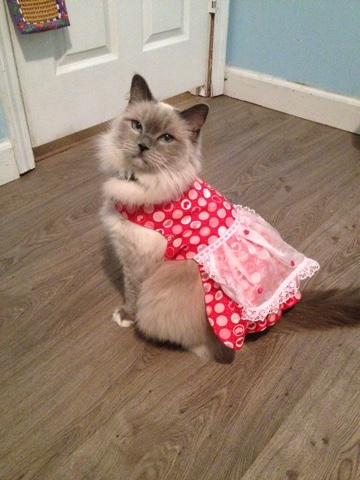 Ragdoll Mommy~
Posted by Life with Ragdolls at 7:45 AM 2 comments: 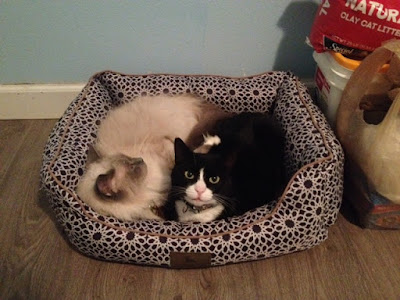 Ragdoll Mommy~
Posted by Life with Ragdolls at 12:51 PM 4 comments: 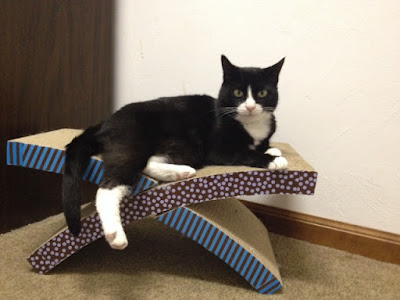 Saphira thinks this is a great invention...

Ragdoll Mommy~
Posted by Life with Ragdolls at 1:00 AM 4 comments:

Last month I had a review to represent for my readers. This is for the Ziwi Peak Lamb Recipe Canned Cat food. This food is a grain free, by product free, soy free, and claims to be GMO free*. It comes in a 6oz can of a 12 packet. This food comes in many flavors and we were sent the lamb. Check it out

All four of my cats enjoyed the food. Especially Saphira. 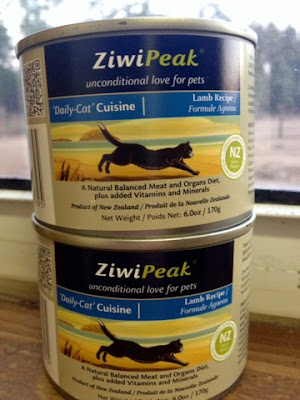 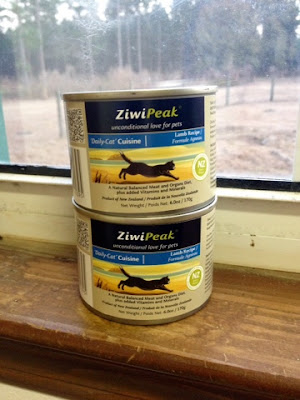 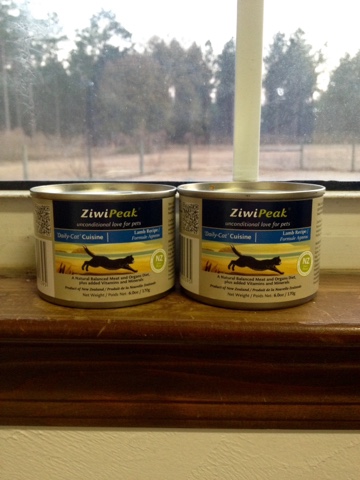 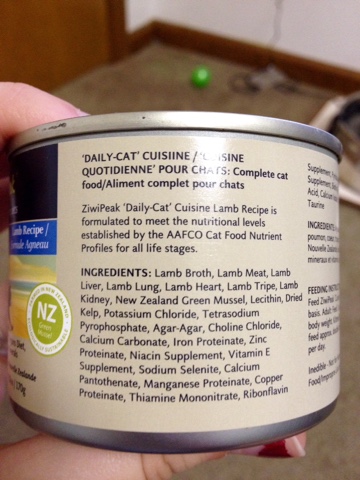 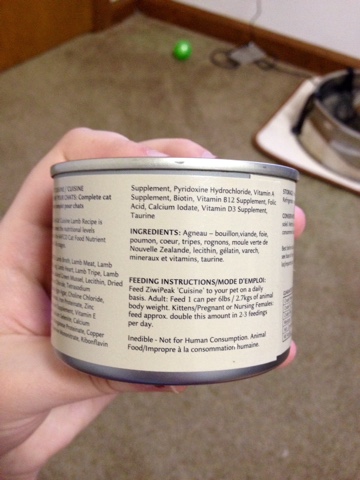 • All four cats loved it.

• One can feeds four cats.

Note: I was sent a free product in a exchange for a honest review. I am never paid to write reviews nor do I accept fake opinions in order to get paid. All reviews are my own.

Ragdoll Mommy~
here
Posted by Life with Ragdolls at 6:30 AM No comments: 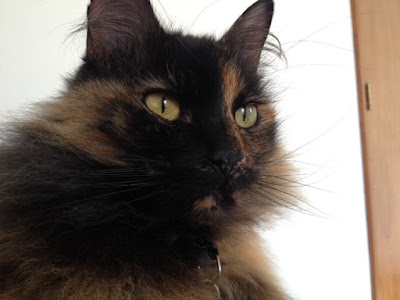 Its one of my favorite songs by Foo Fighters. And, it is now February and I do have a cat named Star, so....
;)

Ragdoll Mommy~
Posted by Life with Ragdolls at 10:47 AM No comments: 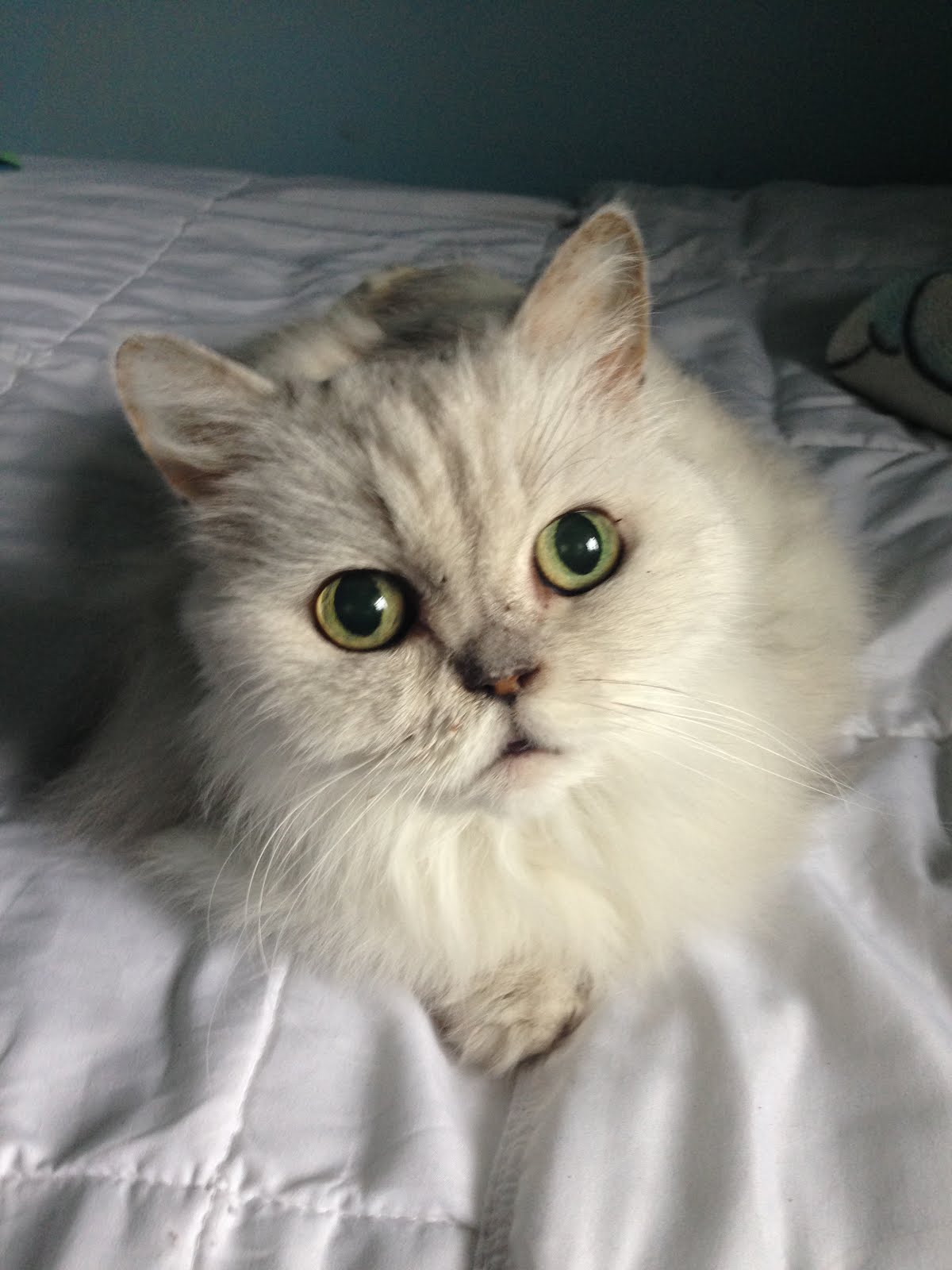 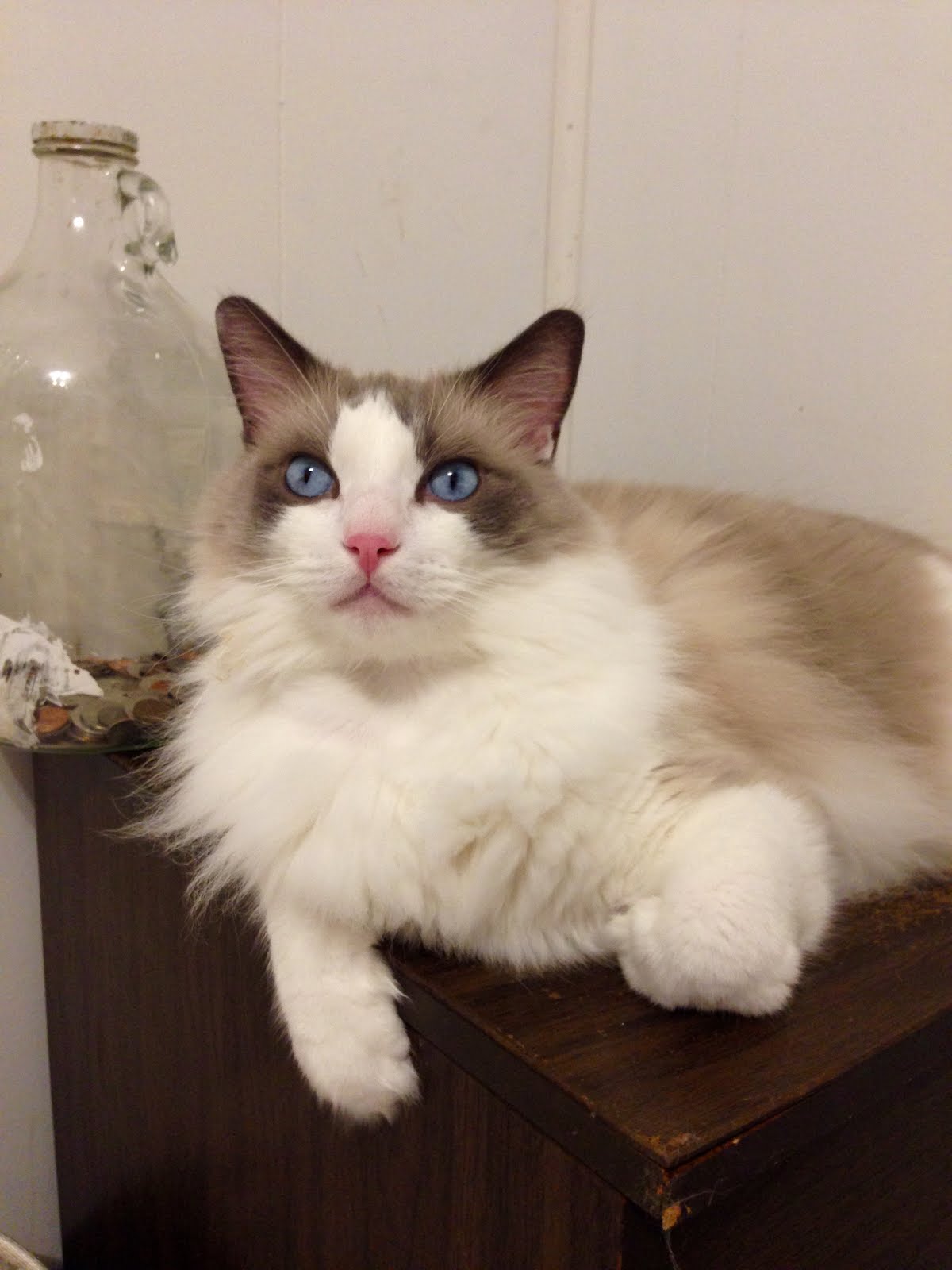 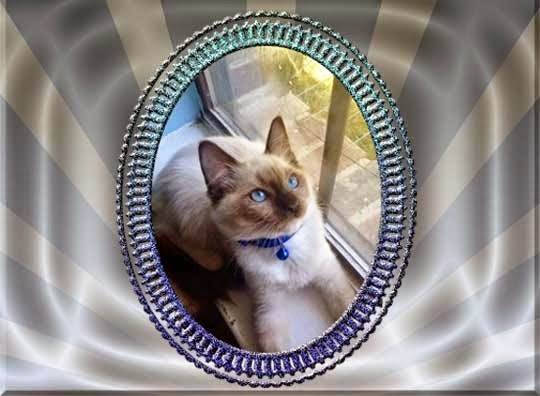 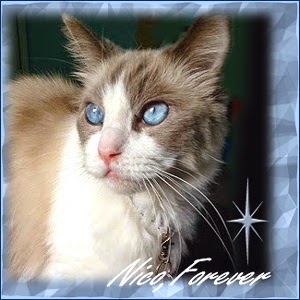